Discuss the latest news and rumors in the magic world.
Post Reply
5 posts • Page 1 of 1

In 2006, I released The Hypercard Project to considerable acclaim. I still occasionally get orders for it and the gaffs for “Son of Hyper-Warp.”

While recently doing some Spring cleaning, I discovered a box of empty Bicycle card cases that the USPCC gave me for ordering an obscene amount of gaffs. That got me thinking about hypercards and card cases. I became feverishly inspired and began abusing numerous innocent card cases. I’m delighted to announce that I have created the world’s first Hypercase! 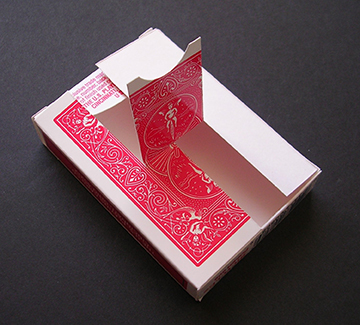 Soon, you too can learn how create this cool impossible object. I’m writing a PDF that will be called, duh, Hypercase. It will be about 20 pages long, with photographs.

I teach you how to construct a hypercase from a regular Bicycle deck. The one-time construction isn’t difficult and takes about 20 minutes. The resultant hypercase is identical in appearance to a regular card case, except for it hypercard back.

I also teach two methods (sleight of hand and gaff) for performing the following effect:

The performer removes the deck from the card case and tables the deck. He holds the card case with its back toward him. Using a pair of scissors, he makes several cuts in the back of the case and covertly manipulates it. He reveals that he has constructed a hypercase. He displays the hypercase to the crowd and allows a participant to poke its interior with her finger to ensure that it’s empty and devoid of subterfuge.

The performer closes the hypercase and stands it upright on its short edge on the table, with its interior facing the crowd.

The PDF will sell for $7.00 and will be available only from me. I’m hoping to release it in early May, but we’ll see how that goes. I’ll keep you posted. Meanwhile, feel free to post any comments or questions, which I’m happy to answer.

Tom Frame
"There is more to consciousness than meets the mind's eye." - Frame

I thought I was done writing Hypercase. But since I created this card case conundrum and began playing with it, ideas have flowed like a crimson current from a severed artery. The final PDF will span about 30 pages.

The hypercase can now be examined before and after you perform “Card to Hypercase.”

A previously vanished object can now be produced from the empty hypercase before performing “Card to Hypercase.”

I recently quit my “real” job as a psychotherapist and clinical supervisor for one agency and accepted a similar position at another agency, for an obscene salary increase. The gig begins on 5/6. My celebration of this move will delay further writing, and possibly result in my hospitalization or incarceration.

My beloved wife and photographer, Jan, will be off raising hell for the next two weekends, so she can’t shoot me, despite her ongoing threat to kill me while I sleep.

Thus, I’m now hoping to release Hypercase in late May.

Stay tuned…
"There is more to consciousness than meets the mind's eye." - Frame

The wonderful Rosie Rings is currently laying out Hypercase. Once I receive it, I’ll make the final edits and it will be done. I hope to release it before the end of June.

Tom
"There is more to consciousness than meets the mind's eye." - Frame

I’m pleased to announce that Hypercase is completed and available for purchase. The PDF is 22 pages long, with 43 photographs.

It sells for $7.00. You can Paypal the funds to me at tomframe1@comcast.net

Tom
"There is more to consciousness than meets the mind's eye." - Frame
Post Reply
5 posts • Page 1 of 1