Discuss products and their reviews in Genii.
Post Reply
9 posts • Page 1 of 1 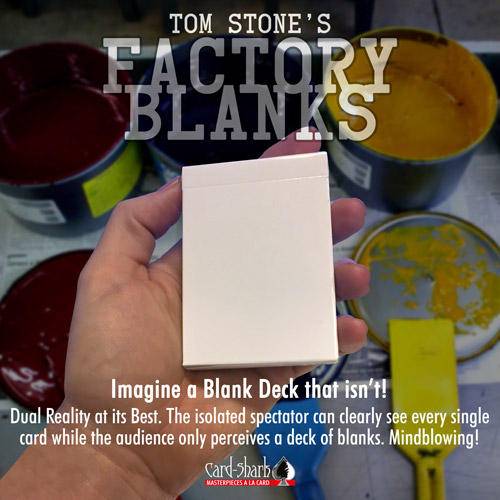 At the recent convention "The Session" in London I debuted a little thingie titled "Factory Blanks". I became quite surprised by the reactions, and even more so to see it sell out in 1.5 minutes. Anyway, it have now been released here, should anyone be interested:
http://www.card-shark.de/index.cfm?page ... &ArtID=306
Stuff & more stuff

Unfortunately I wasn't at The Session last weekend, the first I've missed in a few years. I was speaking with some friends who were there and they spoke highly of this effect and I look forward to seeing it at Blackpool.

However Tom, the most complimentary superlatives they reserved for your performance on the stage show which, they said, was phenomenal.

Yup. At the circle on Monday lots of friends were raving about tom's performance.
Yes, it is mrgoat, I just can't log in with old account.

Tom's lecture was fabulous.
Tom's performance was fabulous.
And tomorrow in my Genii Speaks video for the February issue, I will demonstrate just how FABULOUS this amazing deck of cards is. Genius.
Subscribe today to Genii Magazine

A review of the whole Session convention has just been posted. I'm flattered to see that Factory Blanks got mentioned.

I ordered this as soon as I heard about a new effect from Tom, one of my most favorite magicians.

This really is an amazing effect - a new principle - professionals will think of many ways of using this deck.
Best John

For anyone who wants an English-language version of the review that Mr Stone posted a link to, I've dashed off a translation...

Card Shark has recently released a new mind-reading product: Tom Stone’s Factory Blanks.
It employs an inspired why-didn’t-I-think-of-that? method (which was apparently previously used a few years ago with pictures).
‘Blank’ in this context means ‘plain’ or ‘unmarked’ rather than ‘white’.
One side of the cards is uniformly light grey, while the other side exploits a dual-reality principle: when viewed up close, the standard playing-card designs appear, but from a distance, only uniformly light-grey faces are apparent, matching the backs.
It’s a very clever idea.
There are no nasty surprises here: basically, from a meter away or more, there doesn’t seem to be anything on the cards. They’re light grey on both sides. It’s clear and highly effective.
The idea is explained very well and is based on a physical phenomenon.
You could use it as inspiration to create your own cards or a different set: large-format or ESP cards or pictures, for example, but you’d need to be very precise and technically proficient.
The images are subtle and you shouldn’t expect standard playing-card designs printed in black. This is why they’re referred to as ‘factory blanks’, a term that means any spectator looking at them closely won’t be caught off guard.
Under normal lighting, there are no problems close up and from 50 cm away, the traditional playing-card design is unmistakably apparent.
In a very dark room, you’d be cutting it fine (it’s still doable, however, although there’s a risk that the person may have to squint).
If a card has been chosen, anyone further away will be convinced that the card shown is the product of a spectator’s imagination, although this spectator will merely believe she has chosen one real card from fifty-two prototype cards.
What you see in the video is what you get.
It’s worth stressing that this really is Wysiwyg (What You See is What You Get). The spectator leaned in to get a look, as she presumably had a spotlight shining in her eyes.
Keeping the card in the packet is a presentational feature of one specific routine, but isn’t necessary.
And some of the cards don’t have any dark areas on at all.
Card Shark doesn’t show the faces of the cards closely, as this would expose the method. From a distance, this won’t be a problem at all.
The product comes with everything you need and the deck is complete (fifty-two cards and four extra cards for special routines).
Each card is either readable or appears to be uniformly light grey, depending on distance.
You don’t need to buy any additional props, except of course for routines you come up with, as the possibilities on offer will fire up your imagination.
The product includes instructions with four routines (Basic Routine, Bolder & Faster, Las Vegas Splitter, More Complicated).
You can also download the instructions in PDF format.
An extra routine is available from the site as a PDF download (Wedding Rings), and you’d imagine that more will be added.
Be careful!
Some people won’t be able to see the faces of the cards close up, because of a relatively rare problem with their eyes.
This is why the magician throws the deck into the audience at the beginning: Card Shark has taken the precaution of printing something on the card case that enables the magician, after asking a relevant question, to know immediately whether to invite the person on stage or move on to someone else.
Everything can thus be performed on stage or in parlor settings, as well as close up, under certain circumstances: the rest of the audience will just need to be more than a meter away.
Conclusion
You get exactly what you’d expect from this purchase.
You never get any nasty surprises with Card Shark, everything’s comprehensive, well thought out and well explained.
There’s a chance that some magicians – particularly table-hopping performers – won’t be interested in Factory Blanks (unless they adapt their presentation).
For parlor settings, though, everything’s perfect and easy to use.
Post Reply
9 posts • Page 1 of 1

Return to “Light From the Lamp”