It's hard to believe, but ten years ago this month (November, 2004) my first cover feature in Genii was published. It is the story on "The Magician" starring Bill Bixby:

This month (November, 2014) I am happy to see my 21st cover appear. This one on Alana; a very talented magician from Germany. 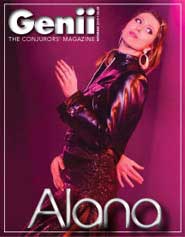 I am so thankful to Richard Kaufman for taking a chance on me. And I am also thankful for you, the readers of the greatest, largest, and longest running magazine in the history of magic!

Time is our most valuable asset, and I am humbled that you all have given me some of yours by reading my work. Thank you so very much.

and here's to another 10 Dustin.
Marketing for Magicians

Congratulations. Any especially fond memories or perhaps articles you would like to pursue.
Michael Manchester
Literacy magic for library and school performances - http://www.librarylegerdemain.com

MManchester wrote:Congratulations. Any especially fond memories or perhaps articles you would like to pursue.

Great questions, thank you, and the first part took some thought. The second is easy: I would like nothing more than to interview Ricky Jay.

As for fond memories, there are many so I cannot narrow it down to one. So, with your kind indulgence, here are a few.

That first story is something that came as a complete surprise. While at the 2003 History Conference, Richard says to me—as if it was a spur of the moment thing—that he is having lunch with Mark Wilson and asked if I'd like to come along. All I thought was that it was nothing more than an opportunity to have lunch with a living legend. During the meal, Richard steered the conversation to "The Magician" and the next thing I know he's telling me that interviewing Mark and writing the inside story about the show was my assignment. Mark already knew about it. (And that would not be the last time Richard set me up for a surprise like that. And I never see it coming.)

There is something about Mike Caveney's house that is bad for my recording devices: I have had two crap out on me (during two different interviews) there. Thank goodness for Tina Lenert; hers seem to do just fine there!

The first time I spent time at John Gaughan's shop, with Richard, for his cover story. That has led to a friendship and a writing partnership that is a lot of fun.

Even though I didn't write the story, being in the room (with mouth shut) with Richard as he interviewed Tony Giorgio.

Each time (and there have been many) that I have worked with Jim Steinmeyer. That is always a learning experience. And the same can be said about Max Maven.

And finally—though hardly last—I will talk about going to Reno to interview Mark Kalin and Jinger (my second cover story).

I had never met them (except in a receiving line after their show which certainly does not count). When I arrived in Reno, Mark told me over the phone (we still had not met in person) that he had procured some tickets for my wife and me to see a magic show that was in town. We were to be there that night and meet with Chipper Lowell and Bob, their assistant, who would be also attending.

The next evening was when I was to see the show at Magic Underground (their own theatre in Reno). I met with Mark after the show; it was our first meeting. Almost straight away he asked me what I thought of the show the night before. I answered by thanking him for the tickets. He pressed me for a real answer.

I am a lousy liar, so I told him the truth (always the easiest to recall): It was pretty bad. Though the star was a well-known performer and generally a good entertainer, this show was, at best, an opportunity lost. And then I ran down a list of issues I had with the production.

Mark was pleased with my answer. That whole evening was an interview of me. Chipper and Bob were there to "feel me out," and Mark knew that the show was a dog. He did not know me from Adam and he was not going to put his trust in me until he knew where I was coming from. He needed to know whether or not I knew good magic when I saw it and if I was willing to be honest. I passed. I spent the next day at Mark and Jinger's home and to this day I count them among my friends.

And that is the biggest deal for me. I have been so incredibly fortunate to work with so many wonderful people over the last decade. Some have become friends and I have learned from each and every one of them. And not a single issue goes by where I do not learn something from Richard. And that is how I like it. Because, as with magic, I am a student of writing and always will be. And I cannot think of a better place to go to school.

Thanks again for asking,
Dustin

Congrats Dustin!!!
Every day is a magical adventure!

The more Dustin writes, the better he gets, so I plan on keeping him busy this coming year!
Subscribe today to Genii Magazine

How about a cover story on Mahdi Gilbert this year?

Congratulations Dustin, and thank you for your writing. Keep it coming!

Great quote!
You could throw a banana out to the audience for a laugh after quoting Groucho. Then have that spectator think of a card and peel the fruit for the revelation.