Discuss the art of Children's Entertainment with your fellow performers.
Post Reply
12 posts • Page 1 of 1

If you are a children's performer, now is the time to start marketing to Cub Scout groups for their annual Blue & Gold banquet. If you don't know what that is, read this from www.scouting.org

Most Cub Scouts celebrate Scouting Anniversary Week with a celebration called the blue and gold banquet. In nearly all packs, the annual blue and gold banquet, which is often the pack meeting for February, is the highlight of the year. It brings families together for an evening of fun and inspiration.

The banquet program must appeal to boys as well as adults. The evening can be conducted as a regular pack meeting (with songs, skits, stunts, and awards), or it can be something different and a little more special. Your pack may choose to bring in outside entertainment, such as a magician or storyteller, or have a video or slide presentation of the activities the pack participated in over the previous year. Choose a master of ceremonies who will keep the evening moving and enjoyable for all.

Careful planning is necessary for the banquet to be successful. Most packs begin planning at least two months in advance. The pack committee should recruit a banquet chair, who in turn may select others to carry out the responsibilities of the program, such as making physical arrangements, handling invitations, choosing a theme, etc. Try to involve as many people as possible, but avoid giving den leaders too many additional responsibilities because it may distract them from their duties to their dens.

A detailed plan for the blue and gold banquet, including a planning calendar, sample agenda, and suggested program activities, is available in the Cub Scout Leader How-To Book.
--
James Munton
www.jamesmunton.com

February is one of the busiest months of the year for me and I LOVE Blue & Golds.

First, they are really fun to do. Cub scouts make for great audiences IF YOU DO A SHOW THAT IS APPROPRIATE.

Secondly, they can pay well and you can sell your BOR products.

Thirdly, if you do a good show you will get a ton of birthday parties and other shows out of them.
--
James Munton
www.jamesmunton.com

Marketing is easy. Just get a list of the pack and den leaders in your area and send them your materials! Send once now, once in December and two or three times in January and you'll quickly fill up your February dates. Another good thing about B&Gs is that many are held on weeknights so you are not limited to just weekend bookings.

Oh? Is that what you meant by blue and gold? I didn't know it had anything to do with the bloody boy scouts. I thought it was some secret clever marketing thing where you make your e-mails look blue and gold for some reason. I must say that I am gravely disappointed.

I am, however delighted that you are now talking about things you actually know something about. This sort of thing will improve the Genii Forum.

You have my full approval for once. Carry on..........
http://www.marklewisentertainment.com/h ... cians.html

I have never heard about these types of gigs. No Canadian magician has ever mentioned them. Maybe they don't have them in Canada. I suppose they must though since boy scouts are here too.
http://www.marklewisentertainment.com/h ... cians.html

Well, I don't know what they call them in Canada, but I am sure they also have an annual awards event.

Did you know that in the USA the cub scouts promise to do their "duty to God and country," but in England and Canada they promise to do it to "God and Queen!"

Roger and Tony will be so pleased.
--
James Munton
www.jamesmunton.com

Agreed! I perform at 3 B&Gs every February. They are a great audience to perform for and as James said...I usually book anywhere from 5 to 8 shows off them.

Thanks for that great information, James. It is pure gold(and blue...if you'll excuse the pun!)

Over the years I have done a number of B and G banquets. However, in recent years I have always been to Blackpool in February for the convention, so that limits my bookings in this field. I have never promoted myself to the packs, but it sounds like a good idea.

When I do get calls, I always find they have a limited budget. Are you prepared to tell us what you charge in Texas?

I will admit, the scouts do make a great audience. I always tell them about Lord Baden Powell, who most of them(including pack leaders) have never heard of. JR
www.ComicMagician.com
www.Magician.US.com
www.BestAssemblies.com
www.SpiritualStage.com

I asked some Canadian magicians about it today including a well known and experienced professional. They had no idea what I was talking about and had never heard of it. I shall enquire further but it does not seem to be a recognised venue up here. I don't think school shows are either and if they do exist they certainly don't require that daft customisation that is needed down south. As for libraries I do them all the time and there is none of that "Learn to Read" crap that US magicians are required to do. Of course the children up here know how to read already because the education system is a trifle more advanced up here than the US system.
http://www.marklewisentertainment.com/h ... cians.html

I would love to discuss this interesting topic further, but I have been forbidden from talking with Mark. Perhaps we can continue the discussion on the Buskers.

I think you are allowed to talk to me. You are just not allowed to argue with me.
http://www.marklewisentertainment.com/h ... cians.html 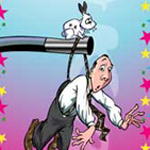 If you do cub scout blue & gold banquets, or any type of show for cub scouts, check out Mike Bent's "Nutty Neckerchief" routine. It comes with custom neckerchief silks that are hilarious (a shrunken one, a "mixed up one", a reverse color one, and one in pink). You start off borrowing a neckerchief, then go through a bunch of stuff happening to the borrowed neckerchief, and it KILLS. The kids love it AND the parents love it because it is obviously customized for the scouts (and it's funny). I use it with a blue change bag with gold trim that fits the theme perfectly (think I got that from Mike as well, don't know if he carries it anymore).
Mike Dobias aka "Xakary"
http://www.xakary.com
Post Reply
12 posts • Page 1 of 1