There is a silk trick with three silks. Two of them are tied together and the third one vanishes. It appears tied between the other two. What is the trick called? 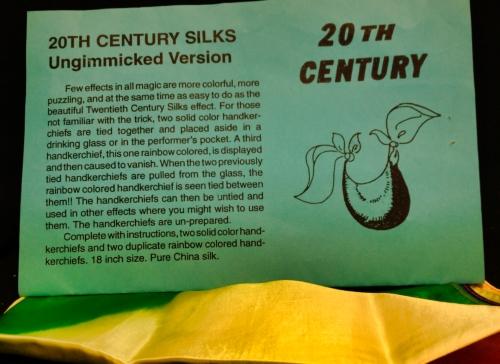 What if you took what you know now and applied it to what you were doing as a very young magician? I have been using this premise to work on several effects. Here is one.

Also shown is a metal cylinder with no top or bottom. It is shown to be completely empty.

The red glass of liquid is poured into the cylinder but, amazingly, it does not spill out the bottom of the cylinder. The magician reaches inside the bottom and pulls out a red silk.

This effect is repeated with the other two glasses and two more silks, green and black are produced.

METHOD
The cylinder is a Ghost Tube (aka Phantom Tube).

Ghost Tube (or Phantom Tube) is basically a large tube fitted with a secret load chamber for the production of silks or various other items by the performer. First published as "The Silver Tube Illusion" by Jules Danby in the Magic Wand (April 1919), it would later become marketed in Britain as the "Ghost Tube", and in the United States as the "Phantom Tube" in 1920. In 1926, The Great Raymond debuted it in South America, where it became known as "El Tubo Raymond".[1][2]

Load the Tube with the three silks.

The glasses are all Tenyo “Milk Tumblers:”

The Milk Tumbler allows you to apparently pour the liquid it contains into the cylinder but no liquid is actually poured.

After each pour, pull the matching colored silk out of the bottom.

For a routine, use three silks but they are gimmicked for 20th Century Silks. See Magipedia:

Twentieth Century Silk or handkerchief is a routine credited to Frank Ducrot. The performer ties two silk handkerchiefs together, balled up and placed in full view. A third silk of a different color is caused to vanish and reappear tied between the two other silks.

Tie the two silks together. The Tube is standing up. Place the tied silks into the tube with their ends over the lip.

Vanish the third silk then show it is now tied between the other two.

Patrick Page has a funny magic gag for this trick.

Trick: You "show" an invisible handkerchief.

You make it vanish, and then show it has reappeared between the other two silks.

In 2010, I released my 21st Century Silk routine, which allows the spectators to freely choose which one of three different color silks they want to vanish and reappear. Then the same spectator that chose the silk to make disappear causes the disappearance himself or herself while the silk is tucked into a bottle and held "prisoner" until the miracle happens. The spectator discovers that the bottle is empty and the silk reappears tied between the other two as in the 20th Century silks. It can be found in The Wizards' Journal #20-01, if anyone is interested.

Spellbinder: I am interested. Where do I find The Wizards' Journal?

Okay, I have made the routine mentioned above, even simpler. Using three "Milk Tumblers" is a lot of trouble. Now I'm working with a milk pitcher (magic) and an LED puck stuck to the side of the Phantom Tube. Pour in milk (white) for white silk. Change LED to red. Pour in milk and red silk comes out. Ditto, several other colors.
Post Reply
8 posts • Page 1 of 1