Discuss aspects of the new digital access to all back issues of Genii and anything therein.
Post Reply
3 posts • Page 1 of 1 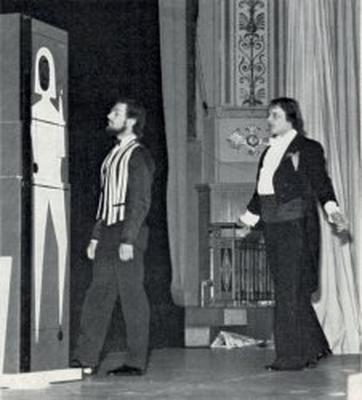 I just had a chance to revisit the November 1996 Issue of Genii Magazine with Joel Hodgson as the cover story. For many magicians Joel isnt a household name, perhaps more better known for his creation of Mystery Science Theater 3000 . While not necessarily considered a magician in the conventional term, I highly agree with both Jim Steinmeyer and John Carney in their regards of Joel as a highly creative individual. After a brief intro of Joel by Jim Steinmeyer, an excellent interview is conducted by none other than John Carney (another creative talent in magic) with some excellent views on the always elusive creative process and the attempts to catalogue, systematize and make practical use of the outflow of ones ideas.

For a clip of Joels stand-up work, I have provided a two-part-link here and here .

Theres also another not-to-well-known one-time-TV-show that Joel and his buddies put together for Comedy Central back in 1995. Its a unique concept that Joel prefaces at length during the actual live-taping itself, and features various comedy skits with several of them magic themed related. Theres also a cameo of John Carney doing his classic thimble work (with stinging bees and band-aids no less) and some stage illusion ideas from Steinmeyer to boot. Ive managed to track down the show in its entirety on youtube split into six 10-minute-segments. You can find the links to them below. Enjoy!

Correction: Some of the information in the initial post needs slight editing and clarification. :blush:

John Carney actually does a billiard ball from mouth production with eggs in the show. The routine I was referring to in the original post was on a 1986 HBO Special, a collaboration Joel did with Jerry Seinfeld in which John also did a cameo.

Steinmeyer was a magic consultant on the TV Wheel Show, along with Carney. None of Jims actual illusions were presented on the show, just some already well known stage and theatrical tricks already fully described in the literature.
Post Reply
3 posts • Page 1 of 1