The February 2022 Issue of Genii has Appeared

The February 2022 Issue of Genii has Appeared 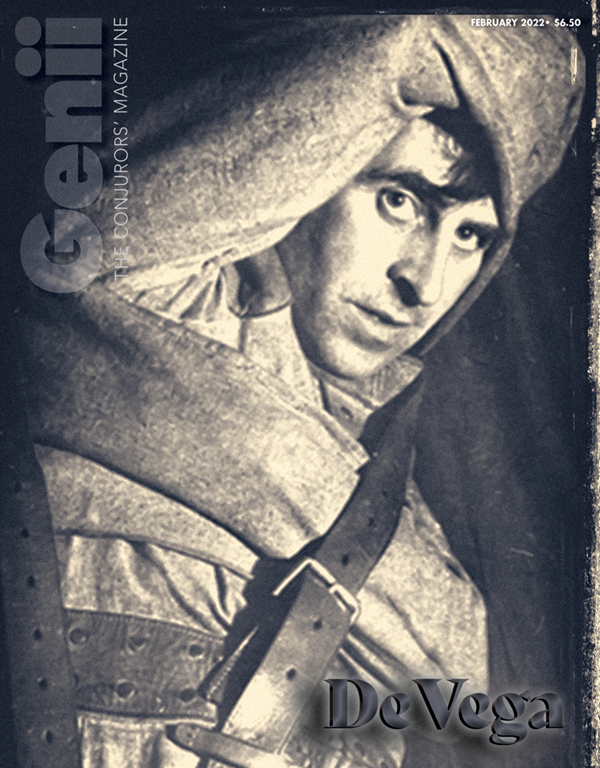 Join us for as little as $35 a year at http://www.geniimagazine.com and get digital access to every issue of both Genii and MAGIC ever published.
Welcome to the 999th issue of Genii, The Conjurors Magazine. This month’s feature story is on the Scottish conjuror De Vega.
We also have Part 2 of “The Self Working Trick,” John Gaspard’s short Eli Marks mystery, in this issue. The only question that remains is, did you guess who the perpetrator of this ghastly murder was—and how it was done?
News via “The Eye” from our intrepid correspondent, Vanessa Armstrong, has an interloper this month, though it’s for only the first section. Mr. Kaufman fills us in on the new Houdini Séance at The Magic Castle. Vanessa handles the rest.
Turn to “The Chamber of Secrets” and marvel over the 19th century Parisian magic set that is, for many visitors, a centerpiece of John Gaughan’s museum. If only mom and dad had access to that one.
For some, the Cards Across plot can be a showpiece. How good it plays is all about the performer. In “The River,” Joshua Jay teaches two versions and, with both, offers a premise that helps make the plot play well.
Apparently one of the strange side effects of the COVID virus—and the almost two year-plus long isolation that it caused—is public misbehavior. It’s not a majority, thank heavens, but it is a loud, obnoxious, and even harmful minority. You hear about it on airplanes and in restaurants, and Shawn McMaster shares some recent examples from The Magic Castle. It reads more like an editorial than our usual report from the old house. It’s worth the read, though what can be done about the issue remains a mystery.
Being able to control children at a kid show is easier than controlling some adults on airplanes and at magic venues. And, it turns out, it starts with the parents or the school and library officials. David Kaye and several of his colleagues deliver advice on that facet of kid show magic in “Expert at the Kids’ Table.”
One of the things in your drawer of unused magic is probably the deck featured in Roberto Mansilla’s “Artifices.” Take it out; you’ll be glad you did. And next to that deck is probably a blank-faced pack. Pull that out, too, and see what Jon Racherbaumer has dug up in “Exhumations.”
David Britland pulls double duty this month. In “Cardopolis” he writes about Al Koran (and shares some video for the digital edition) and ditches the deck of cards for some stick matches and just a tiny bit of math. Then, for your discernment, he reviews books—including Steve Cohen’s new opus on Max Malini—in “Light from the Lamp” where he is joined by Joe M. Turner on videos and Mark Phillips on tricks.
Having good friends is important, especially when you are the scribe of Genii’s “magazine within a magazine”: “Magicana.” Jonathan Friedman shares a couple of items from his friends this month. One uses your smartphone while the other is for our stage card manipulation aficionados.
Pondering “Magicana” just now, one might think that an article could be written about the column started so many decades ago within these pages. Well, we’ve done better than that. We have a 600-page book on it. And those are just the Charlie Miller years! If you subscribe, renew, or extend your current subscription to Genii for three more years, you can purchase this incredible tome, which has a retail value of $150, for a mere $25 (plus postage).
Subscribe today to Genii Magazine
Post Reply
1 post • Page 1 of 1