Discuss the latest news and rumors in the magic world.
Post Reply
9 posts • Page 1 of 1

Website for Louisville International Festival of Magic, Illusion, and the Unusual is now live.
June 14-16, 2013 in Louisville, Kentucky

Mostly shows and lectures for the general public, but will be some magician lecture.

Dang, that's tricky to figure out how to buy tickets.

This act has an interesting picture on the home page (which I can't figure out how to link to). Far more show-bizzy than academic.

There isn't any way to buy a single registration that covers everything, and the ticket prices, if combined, seem pretty high. The magic lectures have no posted ticket prices, and you can't buy tickets in advance, only at the door. The whole thing seems designed mostly for lay people and modelled after similar magic festivals in other countries.

They have a good lineup of magicians, but will it attract lay people?
Subscribe today to Genii Magazine

The festival organizers have listened and created a "Magicians-Only" package that includes entrance to all eight magician-only lectures and one VIP seat to the Festival Gala show on Saturday evening for $140, a savings of over $30 when compared to purchasing tickets for all of the lectures and Gala show.

Individual lecture tickets can also be purchased online for $15 each.

For a limited time, the Louisville Magic Festival is offering a 10% discount for magicians. Just order tickets through their website at http://www.louisvillemagicfestival.com and enter LMC-001 in the Promotion Code field while purchasing tickets.

I spent most of the weekend at the Louisville Magic Festival. It was a wonderful experience. Friday night I got to see Handsome Jack (John Lovick) and Rick Merill perform their acts in one show. That was followed by a show by Banacek, then a show hosted and performance by Dave Drabecky. Each of these shows was in a small theater with tiered seating which had been built several years ago just for magic performances.

Obviously I didn't attend several of the other great lectures or other shows that were scheduled. I didn't even mention the magic lounge performances by Daivd Williamson, Char Long, Eric Mead, and Brent Braun each night for four hours.

If you missed the Festival, you missed a great opportunity to see great magic and mentalism in a perfect setting to watch magic. Hopefully, they will have the festival again next year.

The theater mentioned by Ken is the Baron's Theater at the Whiskey Row Lofts. It was originally built by the father of the current owner and named Squirrelly's Magic Tea Room, but after the father passed, the theater fell into disuse for 15 years. The son decided to restore the theater and you can see that a great deal of love went into the project.

You can see a photo of the stage and seating at http://www.whiskeyrowlofts.com/barons-theater/. What you don't see in the photo is the backstage area with a lot of nice touches (built-in levitation, hidden access to the back of the audience, kitchenette, full bathroom, etc) and the rest of the poster collection, about which Mike Caveney gave a presentation. 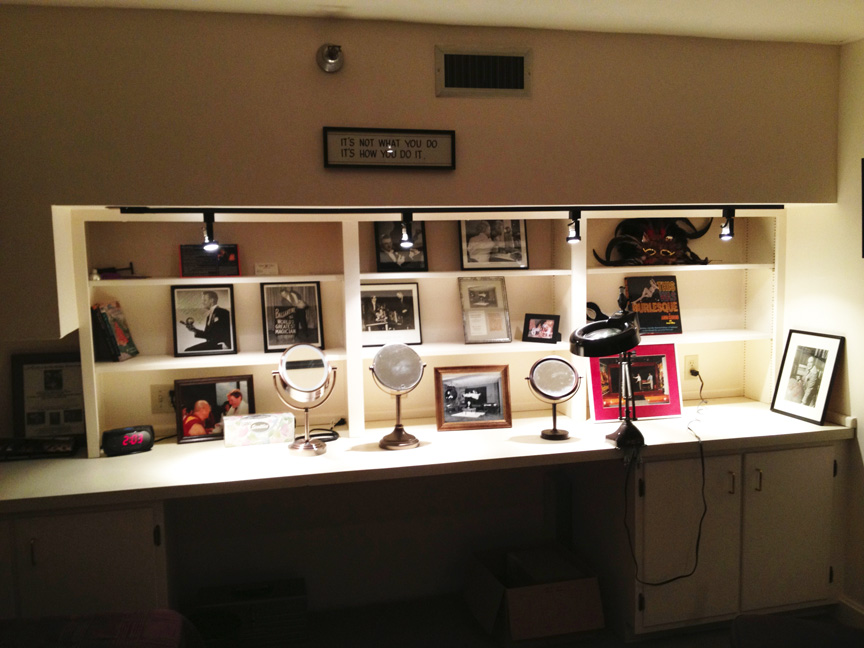 One of the best magic weekends ever.

Here's a peek at the backstage area of the theater.
Post Reply
9 posts • Page 1 of 1